On Being an Online Grown-up 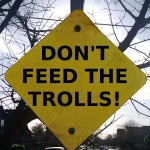 While I’ve come across trolls* before while moving about online, last week was the first time one sought me out. An angry Twitter user took issue with one of my tweets, and a quick look at their recent activity showed that this person wasn’t interested in a reasonable debate, but in name calling and petty fights. Trolls like this have proven inevitable on the internet, and they tend to come out of the woodwork more and more as your online presence rises in prominence.

I am the first to admit that it can be difficult to let these kinds of comments slide, as the little voice in my head keeps encouraging me to fight the good fight and win them over to my side. However, what I have learned in years of participating in online forums, and falling into in a few web fights myself, is that these rarely turn out very well. Even if they seem to start well, these fights can devolve very quickly, and those involved in the fight are rarely willing or able to listen to new ideas. As much as a good debate can be fun, part of being an online grown-up is knowing the place and time for such conversations, knowing how to handle them well, and knowing when you’re just being played.

Last week, when that Twitter user was trying to get a rise out of me, and whenever I’m tempted to jump into the fray, I remember the XKCD comic, where someone can’t go to bed because “Someone is wrong on the internet“. It helps me remember how silly those fights become, and then I can walk away.

If you’re looking for advice for how to deal with online trolls, here are some sites with very good advice:

* For those new to the term, “troll” refers to an individual who makes inflammatory comments/posts online in order to provoke an emotional response.